St Helier Yacht Club's roots go back as far as 1903 and now its membership is currently just short of 3,000 making it one of the largest yacht clubs in British waters.

A club is, above all else, the sum of its members and St Helier Yacht Club has been blessed with a generous sprinkling of interesting characters down through the years. 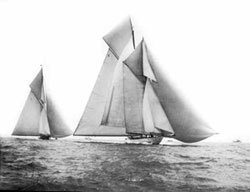 Arguably the most famous was the millionaire philanthropist T B Davis who owned and raced the fabulous schooner Westward between the two World Wars. A Patron of the club, Davis raced Westward in British and European waters, often in close-fought duels against the King's yacht Britannia.

The club's very first Patron was also a famous man - Sir Jesse Boot (later to become Lord Trent), founder of Boot's the Chemist. In 1924 he presented three sailing boats and two rowing gigs to the club to introduce boating to those who could not afford their own craft. Two of those sailing boats, Florence and Jesse, have recently been restored at the Maritime Museum and are now regularly sailing again in St Aubin's Bay, three-quarters of a century after they were donated to the club.

Another notable club member was John Marriner, an intrepid yachtsman who in the early 1950's made a number of extensive voyages through the French canals to the Mediterranean. Then in May 1959 he sailed from Jersey on a challenging trip that took him through the Baltic to the Iron Curtain countries of East Germany and Poland, a daunting prospect during the days of the 'Cold War'.

One intrepid club member was 17-year-old David Sandeman who in 1976 entered the record books as the youngest person to sail the Atlantic single-handed - a record only broken at the beginning of 2003 by 15-year-old Sebastian Clover from the Isle of Wight. 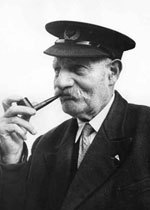 A pivotal moment in the club's history was the involvement of it's members in the evacuation of British troops from St Malo in June 1940. Two convoys of boats sailed from St Helier, the first ferrying troops and stores from the French port to transporters lying offshore, the second helping to take off the remaining troops and demolition party just as German forces entered the city.

The club's immediate response to the Admirality's request for help, described later as 'the little Dunkirk', led to the unique award of a 'Battle Honour' in the form of a defaced Red Ensign that members have proudly flown on their boats ever since. Nine years later, during a Royal Visit by Princess Elizabeth and the Duke of Edinburgh, Prince Philip paid an hour-long visit to the Club specifically to meet the people who had taken part in the evacuation.

Some of the Clubs members have raced successfully in events away from the Island, in particular at Cowes the 'Mecca' of British yachting. Peter Morton, for example, won the famous Round the Isle of Wight Race outright in Odd Job and became part of the club team that won the prestigious Commodore's Cup at Cowes in 1992. Restaurateur George Skelley also enjoyed considerable success, coming third overall and winning his class in the Round the Isle of Wight Race in his 34-ft yacht Borsalino Trois. She also was part of the British team for the ¾-ton Cup in both 1976 and 1977. In 2006 Phil Sharp competed and won his class in the Route du Rhum and continues to campaign towards bigger and better events.

Closer to home, many members have of course achieved considerable success in the various races organized by the club in the Channel Island waters. Although it is a little invidious to mention just one yacht there is no doubt that Arc en Ciel, sailed by Ken and Lenora Renouard, attained an unrivalled selection of trophies over a 15-year period. Built in 1976, the half-tonner quickly established a great reputation, winning nearly all the cups in local racing at least once and some three or four times.

Mrs Renouard also holds a special place in the history of the club for she was the first and only lady member to hold the office of Commodore. The first person to be elected to that position was Bill Kent, who together with 11 like-minded boat-owners established St Helier Yacht Club in 1903. One hundred years later Peter Walsh held the title.

The longest-serving Commodore was W S Le Masurier who was elected to the position in 1925 and remained in the post until 1952. He oversaw the relocation of the club on two occasions and was responsible for organizing the club's involvement in the 1940 evacuation of St Malo and for welcoming Prince Phillip to the club nine years later.

That regal link is reinforced in the foreword to the book 'Sailing through a Century' by Philip Jeune and Kevin Le Scelleur, written by HRH The Princess Royal, a keen sailor and President of the Royal Yachting Association. The princess says that the members of St Helier Yacht Club can take considerable pride in the fact that their organization has played a key role in developing the sailing and boat-handling skills of thousands of Islanders over the past century.

'Long may the people of Jersey continue their close association with the sea,' she concludes, 'and long may St Helier Yacht Club continue to play a key role in that alliance.'