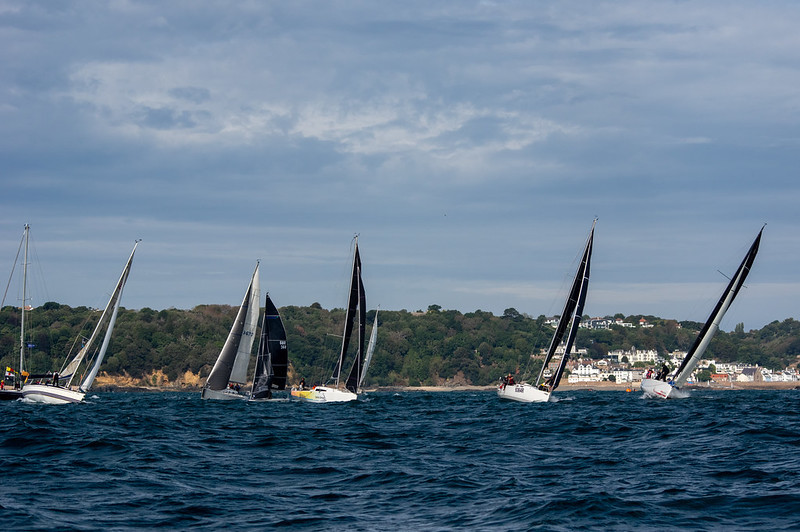 In my September Newsletter I mentioned that August had been quiet, well we certainly made up for it in September! We started the month with the Carey Olsen Combined Clubs Regatta held over the first weekend of the month. This was a great event with approximately 80 boats competing, ranging in size from 7-foot Optimists to 40-foot yachts. Many thanks as always to Bill Harris and his team for all the organisation that goes on behind the scenes and of course those on the water whether in the committee boats or the guard boats.

At St Helier we hosted the Thursday evening briefing and the Sunday evening prize giving. Many thanks to our Chefs who put on a wonderful spread on the Sunday evening. We had a full range of conditions from light airs on Friday to strong winds on the Sunday. I can't go through all of the results but they are available on the website. Special congratulations to Jai Ho who won the Channel Islands Class 1 Championships and Micmac winning Class QT.

This month we had the final races of the Alex Bleasby Retired Gents Races which went down to the last race which was won by Aphros giving her first overall in the series from Paper Tiger. I would like to thank Julian Rogers who is standing down after 15 years of organising this event. He was presented with a very well-deserved engraved glass bowl at the lunch after the final race.

The weekend of 16th to 18th was the last of the Offshore Series races. This is traditionally for the Glendewar and Kent Trophies to Granville and the Trevor Beaton Trophy for the return race. I would like to congratulate Lady Penelope who won the Class 1 race and Jack Rabbit in Class 2. Lady Penelope also won the race back. Overall, for the Offshore Series Arctic Tern was first in Class 1 and Jack Rabbit in Class 2. This weekend was also the last of the Rallies which also went to Granville. It was fantastic having both events at the same time so we could all meet up. We had over thirty boats in the marina and over one hundred members in Granville Y.C. for complimentary drinks. After dinner many met up back at the club staying until the early hours! Next year we are looking at the possibility of having more combined events as they are a great way for us all to get together.

On the 27th September we had a most successful re-enactment of the first hoisting of our defaced Red Ensign on the same day as in 1952, 70 years ago. I was delighted that we had over a hundred members outside the Club watching the ceremony. In 1952 we had four of our cadets helping with the ceremony and we were delighted when all four said that they would be pleased to attend doing the same job as they did then. Unfortunately, Maud Bean was storm bound in France as was our Constable Simon Crowcroft. However, we did have the Deputy Bailiff, Mr MacRae, the Harbour Master, the Commodores of RCIYC and SCSC as well as the Captain of Gorey Regatta Association. The ceremony took place at 18.15 as it did in 1952. We were extremely lucky as it was pouring with rain until 1800 then there was a break in the weather for half an hour until the heavens opened once again! As in 1952 we had the plain red Ensign and the old Burgee, without the coat of arms of St Helier, flying when Mr MacRae arrived. The Ensign was lowered by Mike Allo Snr followed by the Burgee by Kevin Le Scelleur. Eve Battrick then raised the present Burgee followed by Mr MacRae hoisting the defaced Red Ensign. He then repeated the words spoken by the Lieutenant Governor Sir Edward Grasett and I repeated the words spoken by our past Commodore Mr Robert Le Masurier.

After this, we all went up to the Club Room for a complimentary drink and Captain W Saddler presented the warrants; Mr MacRae then gave a short but very informative speech. We sat down for what was an excellent meal prepared by our chefs and this was followed by a recap of the story of the evacuation in 1940 and why we were given the honour of having the defaced red ensign. Our senior past Commodore, Mr Peter Warren proposed a toast to the Club. I would like to repeat the final paragraph of Sir Edwards speech as I feel it is just as relevant today as it was seventy years ago The record of this achievement must be kept for prosperity for the younger generation must know of this, and the records of the deed must be carefully preserved. It is a tremendous honour not only for the Club but also for the whole Island.

Looking forward we have the traditional October Rallye Hubert over the weekend of 8th and 9th of October. This will start with the pursuit race in La Collette and after arrival in Granville there will be the Scavenger Hunt ending at Granville Yacht Club. This is a fun event so why not give it a go? On the Sunday there is a Time Trial for the race back.

On 29th October we have the Clubs Laying Up supper. There will be more about this event shortly from your Social Committee but if last years event is anything to go by it should not be missed. I know that some members are disappointed as our Annual Dinner has filled up quicker than ever before so if you have missed out why not give this a go?