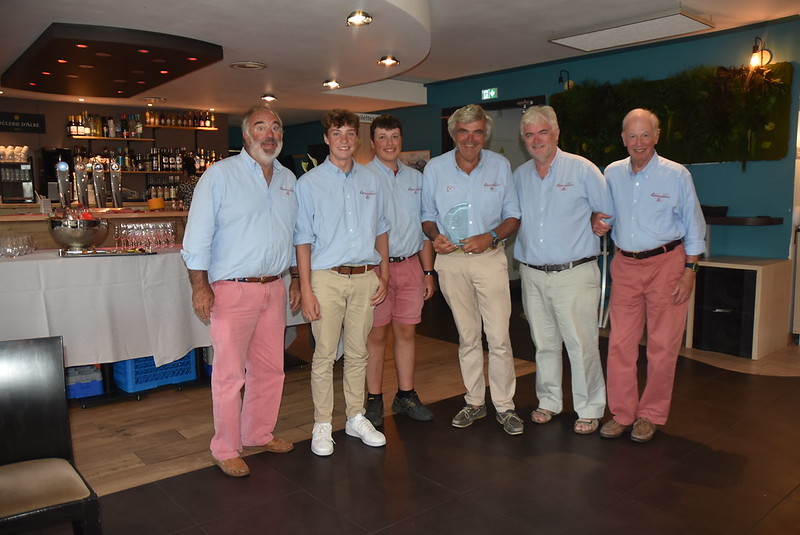 The St Helier Yacht Club has announced the results of the Clubs Biannual offshore race from St Helier to Lorient on the south coast of Brittany.

Ten yachts from Jersey and Guernsey participated in this years race which was last held in 2018.  The race was due to start from St Helier on Saturday, 23 July at 13:00 BST.  Due to a lack of wind, Jeff Speller, Race Officer and skipper of the multi-hull Aquafly, instructed the fleet to motor west towards Brittany.  The wind picked up to F2-3 and Aquafly established a new start line near Roche Gautier.  The race started at 19:00 BST.  Artic Tern was the first yacht across the line, followed closely by Mr Scarecrow, Abracadabra and Jack Rabbit.

There were two courses set for the race both of which led the fleet outside of the Island of Ushant and south-southwest to virtual marks in the Atlantic before turning southeast to Lorient.  The overall course for the three yachts in Class One was 270nm and the course for the seven yachts in Class Two and Three was 250nm.  The wind conditions increased significantly to southwest F5-6 during Saturday night.  The fleet faced continuing strong headwinds and a confused Atlantic Sea as it rounded Ushant and headed southwest to the virtual marks.  The strong wind and rough sea conditions continued through the night on Sunday and into Monday, 25th July.

On Monday evening, the fleet approached the finish line at the entrance to the Lorient estuary.  The multi-hull Aquafly was first across the line at 17:13 BST followed by the single hull yacht Abracadabra at 19:37 BST.  Artic Tern, Mystique of Jersey and Wandering Star were next across the line respectively.  Despite the slow start the race overall was very quick with most yachts averaging over six knots over the two courses based on elapsed time adjusted for their IRC handicaps.

It was a great race in challenging conditions.  We were all glad to be back sailing offshore after the two seasons of limited racing due to covid.  We are looking forward to the 16th Race to Biscay which the Club will host in 2024.  In the meantime, we extend our grateful thanks to Trevor Beaton who kindly sponsored this years race.